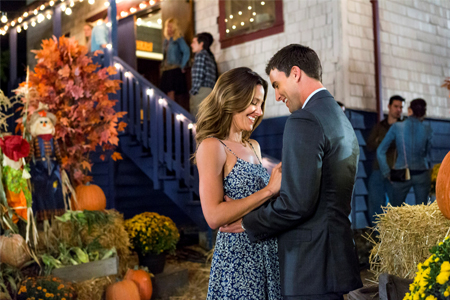 Tis (almost) almost the season for fall-themed movies from the Hallmark Channel. Since I love autumn and all things related, I get pretty excited when these start popping up. So, when an aptly-titled “Autumn Dreams” showed up on my DVR amid the summer love movies this weekend, I couldn’t resist the temptation to burn my pumpkin caramel candle and pretend it wasn’t 90 degrees outside. Yes, I know that this isn’t a new offering from Hallmark; the movie premiered last year as part of their fall line-up, but it is new to me. Let’s get to it!

The Story– Annie and Ben are childhood sweethearts who elope at 18 and 19.  Unfortunately, Annie’s father shows up immediately following the ceremony and convinces them (a little too easily for my taste) that they are too young and that the marriage must be annulled. Fast-forward 15 years, and Annie is a farmer who is set to marry her (boring) farm hand when she receives a court summons for divorce proceedings. What?! They were married all this time! Annie must travel to New York City to appear in court to settle this craziness. In the meantime, she is introduced to Ben’s materialistic wife-to-be (who wants to toss his piano, GASP), his limo driver with a heart of gold, and his hilarious lawyer. Oh, and Ben and Annie reconnect because she reminds him of where he came from, and he is crazy hot and rich. I’ll let you figure out the end.

Season Satisfaction- Since this is supposed to be a fall movie, I thought it might be fun to judge it on how well it fits the whole season motif. Unfortunately, it doesn’t. Aside from a few farming scenes and some pumpkins and leaves at a harvest dance in the end, there is nothing that says “autumn” or “fall” to me. Even the Central Park scenes were green, and there wasn’t a fashionable scarf or cup of hot cider in sight. Now, if we look at the title of the movie, it DOES say Autumn DREAMS. So, maybe we are supposed to be dreaming of autumn? Maybe this is really a summer movie in disguise… You shouldn’t tease me like that, Hallmark Channel.

The Bottom Line-Beautiful people falling in love? Yep, I am in. The actors, including the secondary characters, are better than average. The story, though predictable, was not boring or as contrived as some in this genre. There wasn’t anything especially interesting, but for what it was, it was well-done. I give it 4 stars for simple watch-ability, even though it didn’t really spark my dreams of autumn. 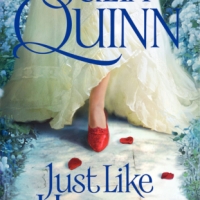